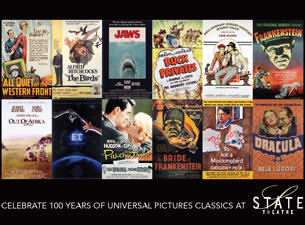 About 100 Years of Universal

Jaws (M) When the seaside community of Amity finds itself under attack by a dangerous great white shark, three men embark on a desperate quest to destroy the beast before it strikes again.

All Quiet on the Western Front (PG) Relive the drama, conflict and power of one of the most influential anti-war films ever made.

The Birds (M) Nothing equals The Birds for sheer terror when Alfred Hitchcock unleashes his foul friends in one of his most shocking and memorable masterpieces.

The Sting (M) Winner of 7 Oscars®, including Best Picture, The Sting, has become one of modern cinema's favourite and most critically-acclaimed films.

Frankenstein (M) Boris Karloff stars as the screen's most memorable monster in what many consider to be the greatest horror film ever made.

E.T. (G)Director Steven Spielberg's heart-warming masterpiece is one of the brightest stars in motion picture history.

Out of Africa (M) The most acclaimed motion picture of 1985 stars Robert Redford and Meryl Streep in one of the screen's great epic romances.

Bride of Frankenstein (PG) One of the most popular horror classics of all time and an acclaimed sequel to the original Frankenstein.

Dracula (PG) Although there have been numerous screen versions of Bram Stoker's classic tale, none is more enduring than the 1931 original. * A ten minute historical Cinesound Newsreel will precede each feature