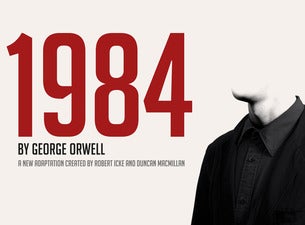 One of the most widely referenced and best known fiction titles of all time, 1984 was first published in 1949. Interest in the title has spiked in recent weeks as worldwide media has drawn parallels between Orwell’s classic about a dystopian future where critical thought is suppressed under a totalitarian regime and the present day regime of President Donald Trump. Currently the #1 title on Amazon’s bestseller list, 1984 has sold more than 30 million copies worldwide and has been translated into more than 65 languages around the globe.

Now, 1984 is re-examined in this radical, award-winning international theatrical blockbuster seen by more than a 400,000 people. Produced by UK theatrical innovators Headlong along with Nottingham Playhouse and the Almeida Theatre, George Orwell’s dystopian classic came roaring onto the stage in 2013 and since then it has become an international phenomenon. It has enjoyed three hugely successful seasons in London’s West End, as well as an international tour including a sold out season at the Melbourne Festival, and will soon open on New York’s Broadway!

“Never lets the audience off the hook.”