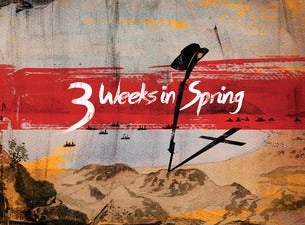 About 3 Weeks in Spring

Endymion Productions is proud to present an inspiring musical about mateship, courage and sacrifice, about unlikely heroes, about love and loss; about the birth of the ANZAC legend...

3 Weeks in Spring is Australia’s musical. This iconic story is coming to Sydney’s iconic State Theatre in August 2019 for a strictly limited season.

It tells the story of the soldiers who landed at Gallipoli (including Private John Simpson of “Simpson and his Donkey” fame, legendary commander Colonel John Monash and war correspondent C.E.W. Bean), and of the loved ones they left behind.

With a score that sets toes tapping and spirits soaring, this powerful musical by writer Ian Gerrard and composer Russell Tredinnick is directed and designed by Matthew Barry. Musical direction is by Harry Collins and choreography by Linda Aubrecht.

Thirty-five performers and 10 musicians bring this important Australian story to life – and show why Australian musical theatre belongs on the biggest stage.

Audiences have already taken 3 Weeks in Spring to their hearts, calling it:

‘A brilliant production of a brutal story’

‘This is a national treasure’

‘So moving – I couldn't stop the tears’

Endymion Productions is donating 10% of every ticket sold to the Australian War Memorial’s Anzac Foundation.