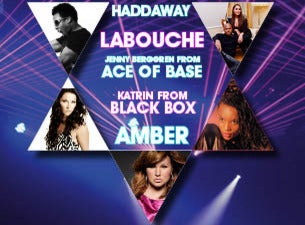 Five of the biggest 90s dance acts LIVE in concert

JENNY BERGGREN FROM ACE OF BASE

His first single ‘What Is Love’ rapidly became popular in Europe, reaching number 2 in Germany and in the UK.

It later reached number 11 on the Billboard Hot 100 and was certified Gold for shipments of 500,000 units.

It spent 52 weeks on the word-wide Top 10 Charts and even today is part of the Top 100 Airplay Charts in the U.S.

The worldwide sales of ‘What Is Love’ achieved a sales quota of over 8 million units.

His second single ‘Life’ hit number 2 in Germany, number 6 in the UK and number 41 in the USA.

The follow-up singles ‘I Miss You’ and ‘Rock My Heart’

were also top 10 smashes in Europe and established him as a successful Eurodance artist.

His first LP, The Album was a multi-million seller which reached Platinum status in Germany

During his impressive career, Haddaway has been dignified with several awards:

The language of music transcends political, religious and cultural boundaries.

with the late diva Melanie Thornton.  Having met in Frankfurt, Germany by a chance encounter,

The successful dynamic duo conquered the charts of the 1990s.  With more than 10-million records sold and the meticulously

including the German Grammy, the Echo, for Dance Song of the Year in 1995.

‘Be My Lover’ peaked at number 1 in Germany, Sweden and the USA, while also reaching the Top 10 in fourteen European countries.

It went on to win the ASCAP award for the ‘Most Played Song in America,’ and sold 6 million copies worldwide.

La Bouche went on to become one of the biggest Eurodance groups of the '90s, with a string of hits worldwide.

In 2001, Melanie Thornton passed in plane crash while promoting her solo career.

Jenny Berggren from Ace of Base

The Ace of Base story started in the early 90’s when the three Berggren siblings (Jonas, Malin and Jenny) formed the techno band Tech Noir.

Next to their rehearsal room, Ulf Ekberg played in another band.  Soon, Jonas and Ulf hit it off, started to write and produce together

and ‘Ace of Base’ as we know them for was formed.

During the production of their first album the band got to know Denniz Pop, an ex-DJ who had enjoyed international chart success

as a writer and producer for Dr Alban.  Denniz had listened to the demo of ‘All That She Wants’ in his car stereo every day going to work at Cheiron studios.  Denniz got involved in Ace of Base’s album that was the start for the international recognition of Cheiron and followed by successes like Backstreet Boys, Britney Spears, N’sync and Five.

Ace of Base’s very first single was ‘Wheel Of Fortune,’ followed by the major worldwide hit ‘All That She Wants.’ ‘The Sign’ and ‘Don’t Turn Around’

also became international hits.  The band first made it in Denmark, then the rest of Scandinavia, Germany, the rest of Europe

and Asia before conquering The US and Canada.

In all, the debut album ‘Happy Nation’ (released as The Sign in the US) sold 25 million copies

and remains in the Guinness book of records as the ‘Best-selling debut album ever.’

When beginning to write and record for the second album ‘The Bridge,’ the pressure was on and everybody wanted to have their say.

Everyone realized that the phenomenal success of the debut would be impossible to repeat.

With the help of hit singles like ‘Lucky Love,’ ‘Beautiful Life’ and ‘Never Gonna Say I’m Sorry’ and promotional trips around the world,

the album ‘The Bridge’ sold 5 million copies, a number most musicians only dream of.

Back in Sweden the band returned to the studio to write for the band’s third album ‘Flowers’ (released in the US and Japan as ‘Cruel Summer’).

The first single was ‘Life Is A Flower,’ which was an immediate success.  It got an award for the ‘Most played song’ on European radio in 1998.

The lyric was changed in America, where the song was called ‘Whenever You’re Near Me.’

The Bananarama cover ‘Cruel Summer’ became the title track of the American album, the single reaching the American top ten.

Other hits included ‘Travel To Romantis’ and ‘Always Have, Always Will.’

Notable is the fact that three of the singles from ‘Flowers’ reached top ten in England, where the band have performed

on the famous show ‘Top Of the Pops’ an astonishing 18 times!

One of the leading exponents of a wave of Italian house music that flourished on the dancefloors of the late 80s and early 90s,

Based in the Reggio Emilia area of northern Italy, the team made use of Katrin (Catherine Quinol) as a front woman for the black box project.

The team were established as one of the top production outfits in Italian dance music, churning out more than a dozen singles a year in their native country. Among these productions the British music industry spotted ‘Ride On Time.’

The single became the first of a series of Italian house records to crossover to the UK charts, staying at number 1 for six weeks in 1989,

and becoming the best dance selling record of all time (still to this day).

The Groove Groove Melody team were also behind the production of Starlight's ‘Numero Uno’ reaching the 9th position in the UK Single Charts.

Under seven or more pseudonyms, they turned out numerous further records.

However, as Black Box, in April 1990, they released an album called ‘Dreamland’ which broke in the US charts as well

as UK and the rest of the world, and featured the hit singles ‘I don't know anybody else,’ ‘Everybody everybody,’ ‘Strike It Up,’ and ‘Fantasy,’

a revamp of the Earth, Wind And Fire hit.

She is best known for her hits ‘This Is Your Night,’ ‘If You Could Read My Mind’ and ‘Sexual (Li Da Di).’

Amber's music career took off when one of her demos, ‘This Is Your Night’ gained interest from Tommy Boy Records.

Soon after its release as a single, it became one of the most successful songs of 1996 and 1997.

In 1999 Amber released her second (self titled) album which garnered the most mainstream attention thus far.

The first single ‘Sexual (Li Da Li)’ achieved success in the US Billboard charts as well as charting across Europe.

which was featured on the soundtrack to the movie 54.

Amber has racked up an impressive seven consecutive No.1 Dance Singles and an additional 6 Top 10 Dance hits.

Many of them made it into the official Top 40 Billboard Charts.

In 2000, Amber released the album Remixed, which contained remixes of all her previous singles, including ‘If You Could Read My Mind.’

It also included a non-album track ‘Taste The Tears’ which had previously appeared on the TV soundtrack for ’Sex and The City.’

In 2001, she received a Grammy nomination as the writer of ‘Love One Another’ for Cher's cover version and also co wrote for Bette Midler.