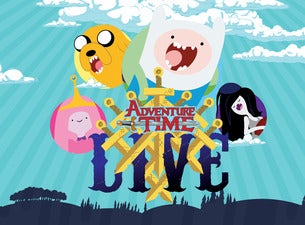 The ultimate Adventure Time fan experience is coming to Australia!

For the very first time,Adventure Time fans in Sydney, Melbourne and  Brisbane will  be  transported  to  the  Land Of Ooo with  Adventure  Time  LIVE –an interactive, live audio-visual event featuring members from the all-star cast of the hit Cartoon Network series.

Since Adventure  Timepremiered  in  2010,  the  Cartoon  Network  show  has  gained  huge popularity  amongst  viewers  of  all  ages for  its  unique  brand  of  humour  and  animation  style. The  show  has  drawn  in  millions  of  viewers  and  dozens  of  illustrious  guest  stars,  including George Takei, Neil Patrick Harris and Andy Samberg. It also famously inspired Hugh Jackman to lip sync the song “Bacon Pancakes”.

It’s no exaggeration to say that over the last decade, Adventure  Timehas  changed  the definition of what a kid’s TV series could be, and it’s had a resounding impact upon popular culture around the world, including Australia.

Adventure Time LIVE will bring this passion and creativity to life, offering everything that fans love about the show and its fantastical Land of Ooo.

Taking  part  in  a tour  across  the  country,  in three  separate  locations  in  March  2017,  will  be Jeremy Shada (the voice of Finn the Human), John DiMaggio (Jake the Dog), Olivia Olson (Marceline the Vampire) and Hynden Walch (Princess Bubblegum).

Each event  will  feature  a  moderated  discussion,  live  readings  of  classic  scenes  from  the Emmy® Award-winning series, audience Q&A with the cast as well as musical performances. Other  activities  include  Cosplay  competitions,  trivia  games,  art  gallery,  sponsor  activations and more.

Adventure  Time  LIVE  is  an  exclusive  event  tailor-made  for  Australian  fans  giving  them  the chance  to get  the  inside  scoop. This  is  a must-attend  event for  any  Adventure Time fan  or cartoon lover!

VIP packages will be available, granting ticket-holders unique access to a private pre-show party with the cast which also includes a one-on-one with each cast member.

So c’mon, grab your friends, whip up some bacon pancakes and hang on for the ride!