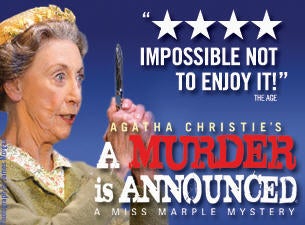 About Agatha Christie's A Murder Is Announced

This October Melbourne’s Comedy Theatre will once again play host to a murder. The producers of last year’s acclaimed tour of The Mousetrap have assembled another stellar all Australian cast to stage one of Agatha Christie's most loved plays, A Murder is Announced.  Featuring Christie’s legendary lady sleuth, Miss Marple, A Murder is Announced establishes firmly Christie’s claim to the throne of detection. The plot is as ingenious as ever, the writing skillful, the dialogue both wise and witty; suspense builds from the very start and is maintained ever so brilliantly until the final revelation.

A Murder is Announced is full of twists, turns, mystery and intrigue that will have you guessing till the very end. If you enjoyed the Mousetrap, you wont want to miss Miss Marple as she works tirelessly to solve whodunit in this Christie masterpiece, A Murder is Announced. Coming to the Comedy Theatre, from October 30 for strictly 5 weeks.

In an English village, you turn over a stone and have no idea what will crawl out. The villagers of Chipping Cleghorn, including Miss Marple, are agog with curiosity over an advertisement in the local gazette which reads: ‘A murder is announced and will take place on Friday October 13th, at Little Paddocks at 6.30p.m.’ A childish practical joke or a hoax? Unable to resist the mysterious invitation, a crowd begins to gather at Little Paddocks home when, at the appointed time, the lights go out and a gun is fired...

“A treat from start to end…Hugely entertaining” - Daily Telegraph

“The epitome of all things Marple…Another standout” – Stage Whispers