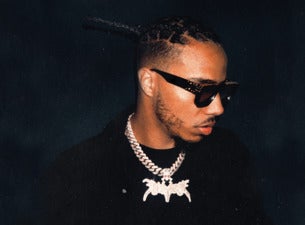 Emerging via the UK grime scene back in 2015, the London-born artist has continuously pushed the boundaries of UK rap throughout his self-built journey. Combining a diverse and unique style with his innate talents, AJ Tracey continues to effortlessly make music that easily translates on a global scale, defining him as one of the most in-demand UK artists internationally.

Since 2015, the Ladbroke Grove rapper has continued to climb heights. From his string of impressive collaborations including Dave, Giggs, Denzel Curry and Craig David, to appearing on tracks alongside Missy Elliott, A$AP Rocky, Rick Ross and more, AJ Tracey has proved he is a force to be reckoned with. 2019 saw his biggest year to date with his single “Ladbroke Grove” being the inescapable sound of Summer 2019, sitting as the top-selling independent single of the year, enjoying an unbelievable 13 weeks in the UK top ten, gaining over 100 million streams and now certified Platinum. His groundbreaking self-titled debut LP shot to #3 in the UK charts, has been streamed over 250 million times globally and is one of the top-selling independent debuts of the year. Most recent hits “Floss” feat. Not3s and MoStack and the wildly popular “Kiss and Tell” feat. Skepta has kept the momentum rolling from the acclaimed record, each sitting on over 10 million Spotify streams.

Joining the wall of fame, AJ Tracey has gone on to win a number of awards including the MTV Brand New title and named DJ Mag's Best British MC as well as receiving nominations for MOBOs, BRITS, and AIM Awards. On an international level, the 25-year-old was named in Forbes 30 Under 30 and has gained support from the likes of Pitchfork, The Fader, Dazed & Confused, Wonderland Magazine, i-D, NME, Noisey, The Independent, The Guardian and as well as ICON, GQ Australia and Acclaim.

AJ Tracey is set to storm onto national stages for the live Australian debut of some of his most prolific hits, while also promising the original come-to-be classics that launched him into the global spotlight. Destined to smash even more goals, don’t miss the UK star live as his meteoric rise continues.