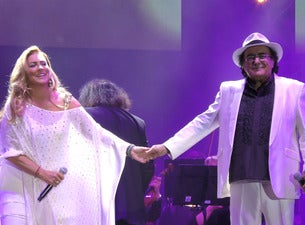 Italy’s favourite musical couple, at last, are bringing their fabulous show to Australia but because of their international commitments, only two shows can be scheduled for the awaiting aficionados, Sydney and Melbourne.

Albano & Romina are regulars on Italy’ premiere event the “Sanremo Song Contest”  with a combined effort of 10 attendances, with one victory (Ci Sara’) and the rest all top 10 finishes. At the Eurovision admirably represented Italy with two top 10 finish, in1976 with “We’ll live it all again” and “Magic oh Magic” in 1985.

Multicultural Australia is definitely their favourite stomping ground as they can perform in Italian, English, French, Spanish and German being the winners of the German Golden Globe with “Felicita’” in 1982 and topped the Spanish /Latino and French charts with “Siempre siempre” and “Enlaces sur le sable”.

Because of their individual careers are blossoming it appears that this could be their last appearance together on Australian soil.