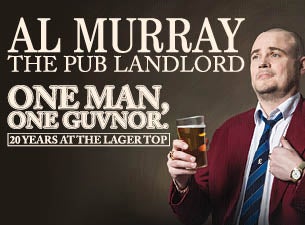 About Al Murray the Pub Landlord

AL MURRAY – THE PUB LANDLORD: ONE MAN, ONE GUVNOR

Twenty years ago Britain’s favourite publican turned politician Al Murray, The Pub Landlord, embarked on his one man mission as the King Cnut of Common Sense, holding back a tide of bottled beer and ninny state nonsense.

To celebrate this milestone, the Guv is going international and bringing his new live show One Man, One Guvnor to Australia this October!

Al Murray is one of the most recognisable and successful comics in the UK with his alter-ego, The Pub Landlord.  Al has hosted and starred in an array of TV series including Compete for the Meat, his British comedy award winning series Al Murray’s Happy Hour, Time Gentlemen Please, and Al Murray’s Multiple Personality Disorder. He has also released eight best-selling live DVDs and his huge stand-up tours have made him one of the most popular live comedy acts in the UK.

‘A supremely polished performer, effortlessly incorporating the audience into the fabric of his show with a deft touch and lightning repartee’