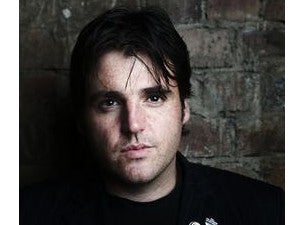 Multi-layered harmonies, loops, songs of family and romance, tracks written across the globe: Urban Wilderness is the long-awaited return of one of Australia’s most acclaimed songwriters, Alex Lloyd. Five years on from his last solo effort, 2008’s Good In The Face Of A Stranger, Urban Wilderness is 12 tracks of pure, pop-tinged song craft, the 4x ARIA-winner finally returning home after 5 years living abroad.

Organic and with a bit of a dirty polish under its skin, Urban Wilderness is the sound of Alex Lloyd doing things his way: take the swagger of opener “Black Cat”, the piano-led pop of “Wait Too Long”, or the singalong lilt of “Light On You”. “I feel like it's a good record, I'm not shy about saying that,” he states. “Everyone did a great job.”

With his family by his side for the last 5 years Lloyd’s been residing in London’s Queens Park, soaking up UK life and enjoying trips to Spain, Cyprus, and France. “I loved living in England,” he enthuses, the Lloyd’s returning to NSW’s Central Coast in December 2012. “I met amazing people, even the guys I had coffee with after the school drop-off,” he laughs. “Creatively there’s loads there to be inspired by, and of course the people who came before you too. In the UK music is just as highly regarded as sport – I found it an amazing place to be a songwriter.”

Kept busy penning tracks for documentaries and artists such as Brighton songsmith Passenger, Lloyd made regular visits back home to record and tour 2011’s acclaimed Mad Bastards, a soundtrack composed with Broome’s The Pigram Brothers. The ‘Mad Bastards Trio’ received three APRA nominations in 2011, including Best Original Song Composed for the Screen (Lloyd’s "Won't Look Back"), Best Soundtrack Album and Feature Film Score of the Year, while they also landed an ARIA nod for Best Original Film Soundtrack. “It took about five years to do that project,” Alex says. “The collaboration was a project of the heart. It was just pure enjoyment, and gave me a new lease for music.”

That newfound excitement is all over Urban Wilderness, a collection of songs Lloyd penned without thinking about the framework of an album. Before flying home he’d reached out to an old mate to share demos – APRA, ARIA and Golden Guitar winner Shane Nicholson. Upon listening Nicholson knew Lloyd had an album, inviting his pal to record at his Central Coast studio, The Sound Hole.

“Just before coming home I was a bit n the wilderness – that's where the title comes from, not knowing what the fuck you want to do,” explains Lloyd. “I was musically lost. Shane had a different perspective – plus he was also someone who hadn't heard those tracks before.” Simply put, Lloyd needed “someone else to step in and say, ‘It’s okay. What you're doing is good.’”

“Anie” was the first song to appear, inspired by visits from Lloyd’s sister-in-law. “It’s a sweet song written from the perspective of a mother… Maybe I shouldn't talk about that one, I'll get in trouble!” he jokes. More recent is lead single "Better The Less You Know", the chorus melody inspired by his nine-month old son, Elvis. “In order to keep him happy in the car I'd sing that hook. But I began to really like it, and slowly developed it over weeks and weeks of driving around.”

Album opener "Black Cat", with its fuzzed-out chorus, was recorded largely in Lloyd’s London home studio, the singer co-writing with a friend who encouraged him to drop lines like, “The Devil has my hands tied”. “It's different lyrically for me: there's words in there I probably wouldn't have put in if it was just me alone,” he says. The lovelorn duet “Honestly” is a standout, Lloyd joined by Kasey Chambers. “I didn't want to overcomplicate the song,” says Lloyd. “I wanted to keep it clean, and it has this simple & great beat that just let’s the song do its thing.”

"Good Thing" was written in flight, Lloyd fantasising about a man who takes a long journey without knowing if his sweetheart still cares, drums recorded in Sydney with another old mate, Declan Kelly. “Waterfall” is about Jake, Lloyd’s first-born, while the singer reckons he’s in love with the sound of ”Bring It On”: “My favourite snare drum sound ever!”

For two decades now Lloyd’s enjoyed life as both an independent artist and one signed to a major. Now, Lloyd wanted 100% creative control. He teamed up with crowd-funding site Pledge Music, fans embracing pre-orders and snapping up exclusive paintings. “I've been signed to a lot of labels in my time: EMI, Sony, Festival. Going down this path means it's my path – I won't be waiting for someone else to make a decision in order to move forward,” says Lloyd of the DIY move. “It's a different landscape now.”

Five years in the making, for fans at home Alex Lloyd’s latest listen is long overdue. “I don't want to jinx this record, but it’s great. I did things I hadn’t really done before – and I’m proud of that.”