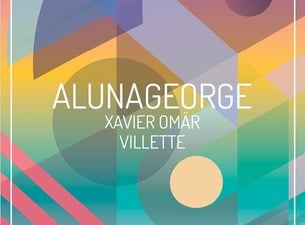 If you haven’t heard of AlunaGeorge yet, it’s only a matter of time. The uber-hip British duo’s futuristic pop sound has made them a favorite with fans and critics on both sides of the pond, and singer Aluna Francis brings a perfect mix of sweetness and swagger to the stage at the pair's unforgettable shows. As she delivers her candy-coated vocals and owns the stage in stylish streetwear, producer George Reid kicks out a next-level blend of ‘90s R&B, house, and experimental hip hop. AlunaGeorge has electrified crowds at Coachella and Rock in Rio with infectious cuts like “You Know You Like It”, and fans can’t deny  that fact as they dance their booties off to the pair’s polyrhythmic beats and catchy hooks.

Singer Aluna Francis and producer George Reid began collaborating in 2009 after Reid remixed the track “Sweetheart” by Francis’ band My Toys Like Me. They made their debut as AlunaGeorge in 2012 with the digital single “You Know You Like It”, and by 2013 they were Brit Award and BBC Sound of 2013 nominees. They scored their first Top 40 hit in early 2013 with the track “White Noise”, a collaboration with UK dance darlings Disclosure. Later that year the pair dropped their debut album Body Music, which peaked at No. 11 on the UK Albums Charts and No. 2 on the US Heatseekers chart. Since then they’ve performed at major festivals and awards shows around the world, drumming up major excitement for their 2016 sophomore album Carnality Hurricane.