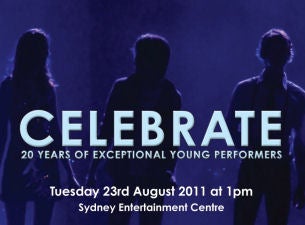 2011 marks the 20th anniversary of the Talent Development Project. This year the Mary Lopez TDP GRADUATION CONCERT will be held on Tuesday 23 August at 1pm at the Sydney Entertainment Centre. The concert returns to a daytime event with 14 students set to graduate - a record number in this 20th anniversary year. TDP Graduation Concert is one of the biggest, most exciting showcases of young Australian talent that launches the careers of the best singers and songwriters selected from NSW public schools.

The Concert will be hosted by former Australian Idol MD and TDP graduate JOHN FOREMAN who will be joined by Special Guest artists Julie Goodwin, Paulini, Lorenzo Rositano, Trevor Ashley, David Harris and the Golden Guitar winning Duo McAlisterKemp. The 14 graduating students come from many musical genres and include four from musical theatre, one with a jazz background, one classical performer and the remainder contemporary singer/songwriters.

TDP is Australia's most successful entertainment industry music program, managed by founder and Artistic Director, MARY LOPEZ AM who said recently "The class for 2011 is full of unique and hugely talented emerging singers, songwriters and instrumentalists. They all have outstanding talents and have benefited enormously from the wonderful training they've had in TDP from our industry experts. We hope the breaks come their way and that their discipline and passion continue to drive them forward".

TDP was launched in 1991 with the aid of the NSW Government and private sponsorship, and through the support of industry professionals, prepares young performers from NSW public schools for a career in the entertainment industry. Human Nature, Angus & Julia Stone and The McClymonts are just a few of the TDP graduates who have gone on to enjoy thriving performance careers. The TDP Graduation Concert is your chance to see first-hand the amazing talent of the future stars of the Australian music industry.
Advertisement