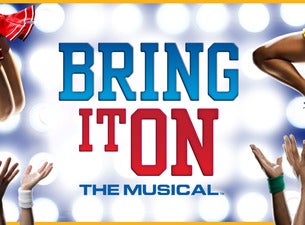 Bring It On: the Musical Tickets

About Bring It On: the Musical

Get ready for it Sydney!  BRING IT ON THE MUSICAL is set to premiere this August for strictly 2 weeks only!

Following a sold out debut season, and recent nomination for Best Production of a Musical (Green Room Awards), this high energy hit features an exciting fresh sound and explosive choreography with aerial stunts.

Sprinkled with sass and inspired by the hit film, BRING IT ON is a hilarious, universal story that is sure to be everything you hope for and nothing like you expect.

Campbell is cheer-royalty at Truman High School and her senior year should prove the most cheertastic – she's been named captain of the squad! But, an unexpected redistricting has forced her to spend her final year of high school at the neighbouring hard-knock Jackson High School. Despite having the deck stacked against her, Campbell befriends the dance crew girls and, along with their headstrong and hardworking leader, Danielle, manages to form a powerhouse squad for the ultimate competition – the National Championships.

These tickets won't last long - join the wait list and get first access to the best seats.