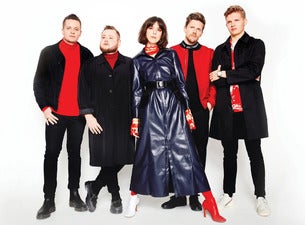 Of Monsters and Men Tickets

About Of Monsters and Men

Multi-platinum Icelandic quintet OF MONSTERS AND MEN have announced a handful of special shows this summer! Taking in Sydney’s Enmore Theatre on Tuesday 7 January, and Melbourne’s Festival Hall on Friday 10 January. The band will also bring their high energy set to Falls Festival 2019-20.

The first Icelandic band to reach 1 billion streams on Spotify, Of Monsters and Men are a global force of indie-pop and stadium folk. Known for their monstrous hooks, these singalongs sit beside vulnerable admissions with rich melodies.

Last on our shores in 2016, Of Monsters and Men embarked upon a sold-out East Coast run that demanded second shows to be added in all cities. Returning with impressive third studio album ‘FEVER DREAM’, fans are sure to be chomping at the bit to hear its giant tracks - such as ‘Alligator’ the empowering anthem that raced to No.1 on the Billboard Alternative Charts.