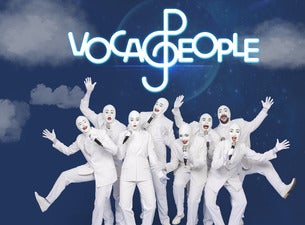 Dressing in whole body milky-white with ruby-red lips, Voca People present themselves as a group of

friendly aliens whose galactic adventure lands them on the planet earth. Without any instruments and

recreate the most appealing music. This May, this group of aliens with a worldwide audience of over 3

million will be leading the audience through a musical odyssey, featuring more than 80 a-cappella

and beat-box versions of all-time favourite hits including music by Madonna, Michael Jackson and

As visually stunning and hilarious as it is vocally dazzling, these 8 talented alien singers are also

comedians who engage the audience to participate in a way that delights and interacts with the crowd.

excitement: From the history of music to the songs of the silver screen to the music of love and more.

"The Coolest Show Ever"

“A BLAST! The highly charismatic group of comedian singers SIZZLE!”

Successfully ran in over 22 countries around the world, now the Voca People finally ready to blast the

entertainment in Australia - Come and bring your family, friends and love to this terrific musical

comedy with a sensational experience. Book the ticket now!