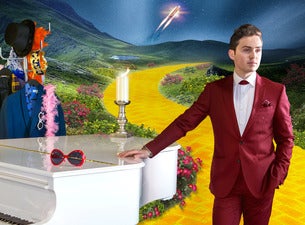 Australia’s Prince of crooning and love ballads, Harrison Craig, returns in 2019 to embark on a national tour honouring the emotional, intimate and soulful love songs of the great, Sir Elton John.  After an extensive tour that saw Harrison perform an impressive 54 shows in 2017/2018 supporting his Kings of Vegas album, Harrison has never been more ready to belt out the love songs that were made famous by Sir Elton John and that are featured in the soon to be released musical drama motion picture based on the life of Elton, titled ‘Rocket Man’.

This show will be a delicately curated set of Elton John’s love ballads the likes of “Can You Feel The Love Tonight”, “Circle Of Life”, “Candle In The Wind”, “Sacrifice” and of course the title track, “Rocketman”, all performed with Harrison Craig’s trademark rich vocal tones and accompanied by piano.

Add to this a selection of Harrison’s own hits as well as showcasing his brand new original song that will be released later this year titled “Even If You Say So”.