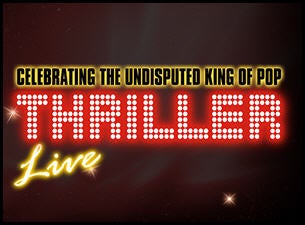 THRILLER LIVE is over two hours of non-stop hits that pays homage to Michael Jackson’s legendary live performances and the magic of his 45 year musical history.

Featuring all of Jackson’s favourite songs including: I Want You Back, ABC, Can You Feel It, Off The Wall, The Way You Make Me Feel, Smooth Criminal, Beat It, Billie Jean, Dirty Diana, Bad and Thriller!