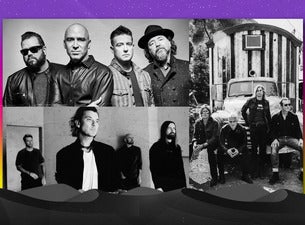 UPDATE: Under The Southern Stars has been rescheduled to February/ March 2021. Tickets remain valid for new dates. More info: https://bit.ly/TMEventUpdates

Celebrating 25 years since the release of their iconic Throwing Copper album, +LIVE+ are one of the most beloved rock bands ever to tour the nation. During their career, +LIVE+ have achieved seven Top 5 albums in Australia, three of which topped the charts at #1 for a total of ten weeks! They have had a string of top 40 singles and Throwing Copper spent over two years in the Australian top 50 between 1994 and 1997. It has been certified 8 times platinum and was also the 8th highest selling album in Australia in 95/96.

+LIVE+ reunited with original frontman Ed Kowalczyk in 2017 and have been blowing audiences away with their power ever since. From the rocking All Over You and I Alone to the glorious emotion of The Dolphin’s Cry and Lightning Crashes, +LIVE+ are playing with a vengeance and a vigor that reveals the band in top form and better than ever!