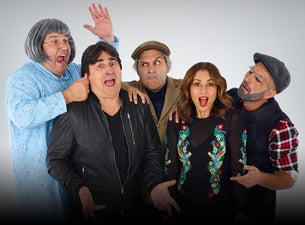 TOGETHER WITH SOOSHI MANGO LIVE ON STAGE!

Mary won a Best Comedy Performer Logie Award for her role as Effie while Nick went on to write, star and produce the box office breaking comedy film The Wog Boy (1999).

Now, for the first time since their stage show Wog-A-Rama (1993) a quarter of a century ago, Nick & Mary are back together on stage, alongside internet comedy sensations Sooshi Mango, in their brand new comedy stage show Star Wogs - The Ethnics Strike Back!

“We’ve both been busy with our own projects over the years and I’m really excited to be back onstage with Nick, who I started this whole crazy journey with thirty years ago,” said Mary.

“Mary and I have a unique chemistry when we work together. As time has gone on I’ve come to realize how rare and special that is in our industry. As for Sooshi Mango they are funnier than ever and have amassed a massive online following. This will be the best stage show we’ve ever done! We can’t wait to bring it to Australia from August 31st” he said.

Star Wogs will feature all of Nick, Mary & Sooshi Mango’s most popular character creations in a sketch comedy format and will be the must see Comedy Spectacular of the Year!