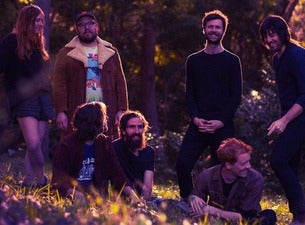 About The Middle East

After an absence of eight long years, beloved indie folk-rock troubadours The Middle East are giving Australian music lovers cause to rejoice as they announce a reformation to perform a special, one-off show at the Forum Melbourne in January 2020.

After releasing their genre-blurring debut EP which featured the singles ‘Blood’ and ‘The Darkest Side,’ the Townsville-bred collaboration were celebrated for a musical amalgam that set them apart from their peers. It was this distillation of styles, their own lush, orchestral version of indie pop that landed them coveted spots on international festival line-ups including Coachella and Glastonbury.

In 2011 their debut album I Want That You Are Always Happy further etched the band into the collective DNA of music lovers across the globe before the members suddenly called it a day. Rumours over the years of solo projects and one-off collaborations did nothing to quell the desire for fans to once again hear the band live.

Melbourne music lovers will have the opportunity to vibrate in the same room along with the band and six additional performers (including a string quartet), performing their most enchanting songs, plus a mystery bag of new and unreleased material.