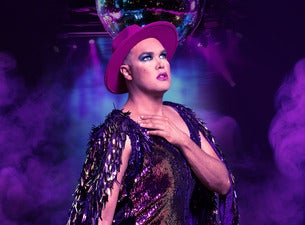 Dripping in glitter & diamonds and inspired by the opulent New York City club scene of the early ‘80s and ’90s, prepare to be transported into a world where the rules are thrown out the window! Come and enjoy an evening of dance, drama and disco with international award-winning comedy and cabaret superstar Hans as he returns to Melbourne with his brand new show, Haus of Hans: Disco Spektakulär - live at The Palms at Crown.

Winner of Best Cabaret at the 2020 and 2019 Adelaide Fringe Festival, Hans is “the ultimate entertainer” (Channel Seven) who is “chatty, catty and completely hilarious” (The Scottish Sun).

Hans is frequently seen on TV screens, including America’s Got Talent: The Champions (where he made it though to the Grand Final), Australia’s Got Talent, Eurovision: Australia Decides Live, Celebrity Name Game, Sunrise, The Morning Show, Today Extra, ABC News Breakfast... basically, Hans has been on every TV show!

Haus of Hans: Disco Spektakulär plays for one night only at The Palms at Crown on Saturday 27th February.

People under the age of 18 must be accompanied by an adult.