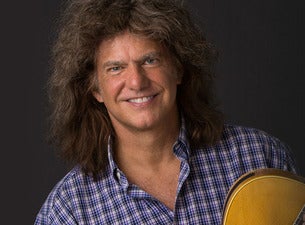 Pat Metheny first burst onto the international jazz scene in 1974 displaying his soon-to-become trademarked playing style, which blended the loose and flexible articulation customarily reserved for horn players with an advanced rhythmic and harmonic sensibility - a way of playing and improvising that was modern in conception but grounded deeply in the jazz tradition of melody, swing and the blues. With the release of his first album, Bright Size Life (1975), he reinvented the traditional "jazz guitar" sound for a new generation of players.

Inducted into the Downbeat Hall of Fame in 2015 as its youngest-ever member and only the fourth guitarist (joining Django Reinhardt, Charlie Christian and Wes Montgomery), Metheny has throughout his career continued to redefine the genre by utilizing new technology and constantly working to evolve the improvisational and sonic potential of his instrument.

Metheny has spent much of his life on tour, often doing more than 100 shows a year since becoming a bandleader in the 70s. He continues to be one of the brightest stars of the music scenes today.