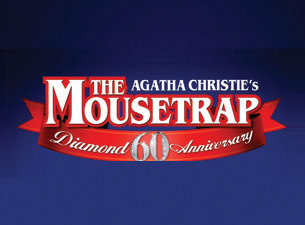 Agatha Christie, the mistress of mystery, brings you her most popular creation, The Mousetrap. When a group of strangers are trapped together at a manor house during a snowstorm, they soon discover one of them is a murderer! Is it the newlyweds whose rampant suspicions nearly wreck their marriage? Maybe it's the spinster with the curious background. It could be the architect, the retired Army Major or maybe the odd man who claims his car overturned in a snow drift! We'll never tell... You would think audiences would know whodunnit by now, but after more than half a century they are still guessing! Currently celebrating its 60th year in London, The Mousetrap will have you gripping the edge of your seat!