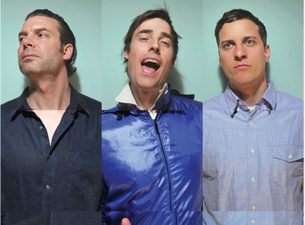 Battles’ stunningly complex and undeniably fun experimental rock is just as cerebral as it is cathartic for audiences. Each member adds a necessary component to their joyfully adventurous sound in concert, starting with the chopped samples and grooving basslines of Dave Konopka. Ian Williams pulls double duty, tapping lightning fast licks on his guitar with one hand while hammering out insane synth runs with the other. While these two blast off into outer space, drummer Jon Stanier pounds out driving drum rhythms that are sure to get ticket buyers bouncing to the beat. As the band plows through mind-blowing favorites like “Ice Cream”, “Atlas”, and “The Yabba”, audience members won’t be able to resist Battles’ swirling sonic textures, hard-hitting rhythms, and mind-blowing instrumental prowess.

Featuring a veritable who’s-who of underground virtuosos, Battles has carved out a unique and adventurous space in the experimental rock scene. Drummer John Stanier (Helmet), guitarist/keyboardist Ian Williams (Don Caballero), guitarist/bassist David Konopka (Lynx), and guitarist/composer Tyondai Braxton got together in 2002 to start Battles. After a couple of EPs, the quartet released their full-length debut Mirrored in 2007 to widespread acclaim thanks to their use of cutting-edge looping technology in a rock context. Just as the group was making a name for themselves, though, Braxton decided to split with the band in 2010 to focus on his goals as an avant-garde composer. The remaining three members soldiered on with the celebrated 2011 album Gloss Drop, focusing on instrumental rock while featuring guest vocalists like Gary Numan, Matias Aguayo, and Kazu Makino. The trio continues to thrill audiences at their amazingly energetic live shows and explore new sonic frontiers with their stellar recorded material, including 2015’s La Di Da Di.