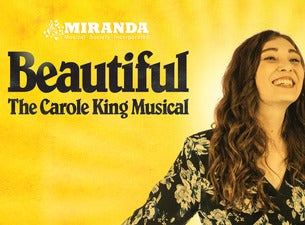 Carole King's major success began in the 1960s when she and her first husband, Gerry Goffin, played by Jackson Gibbs, wrote more than two dozen chart hits, many of which have become standards, for numerous artists.

King's success as a performer in her own right didn’t come until the 1970s, when she sang her own songs, accompanying herself on the piano, in a series of albums and concerts. After experiencing commercial disappointment with her debut album Writer, King scored her breakthrough with the album Tapestry, which topped the U.S. album chart for 15 weeks in 1971 and remained on the charts for more than six years.

Carole King has made 25 solo albums, the most successful being Tapestry, which held the record for most weeks at No. 1 by a female artist for more than 20 years. Her record sales are estimated at more than 75 million copies worldwide

Emilie Lawson plays the role of Carole King in this production of BEAUTIFUL- The Carol King Musical, and when asked why she auditioned for this iconic role she said “Primarily because I knew it to be such a fantastic show musically! The songs are so iconic and have had a real impact on me as a young performer. I saw the show when it toured in Australia a few years ago and I was blown away by Carole’s story and the way she was able to completely revolutionise the rock and roll industry for female performers and songwriters”.

She went on, “I didn’t know a whole lot about Carole King before I saw the show professionally. I was actually quite adamant that I didn’t want to see the show with my family, as I didn’t recognise her name or any of the “classic songs” she apparently wrote. Long story short, I saw the show and walked away with such a deep appreciation for her life. And as it turned out, there were several songs I recognised, I just never knew they were here! Particularly, Natural Woman and I Feel The Earth Move!”

We asked Emilie if she has been doing any particular research for this role. “Yes, I’ve been doing lots of different research to try and encapsulate Carole - especially across her early years which are what is primarily featured in Beautiful. My main source has been her biography, Natural Woman, which gives such a rich overview of her early life and career progression. In addition, I’ve loved watching videos of her perform live, just to get a real essence of how she relates to her audiences and uses her music to captivate them without a big band, but just herself, at a piano, doing what she loves”, Emilie said.

Does she have a favourite song from the show?  “Ooh it’s a tough one, but my favourite song definitely at this stage is Natural Woman. Without spoiling too much about the show, when Carole sings this, there has been such a strong build up to that moment and it’s the first time you really see her stand in her own right as a solo performer and artist. It’s a powerful song and one I know resonates with so many people. Plus, Aretha Franklin sung it, so you know it must be something special!”, Emilie said.

Directed by Col Peet with Musical Direction by Peter Sampson and Choreography by Dolores Dunbar.