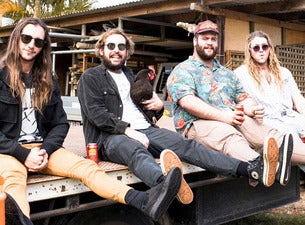 From a friendship formed on the primary school oval to the sticky soles of the mosh pit floor, Beddy Rays are four young tradies who grew up together in a suburb just outside of Brisbane called Redland Bay (which is best and lovingly known as Reddy Bay). After throwing a few horrible names around they switched the letters of their hometown and bada-bing-bada-boom… ‘Beddy Rays’ were born.

The fledgling band first emerged in 2017 with their debut EP ‘Lost Found Beat Around’ which is brimming with scuzzy bedroom jams, and then followed it up in late 2019 with the sharper and more refined sound in an ode to broken relationships, Kicked. The band have since gone on to cut their teeth on the road securing support slots for some of Australia’s biggest exports among the likes of Tones And I, Dune Rats and Hockey Dad.