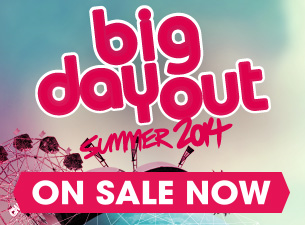 About Big Day Out

Line-Up Announced!
The wait is over, it's roll out time for Big Day Out 2014.

We have 3 rare jewels in the 2014 Big Day Out crown playing full concert sets, all major headliners in their own right, all coming together in the spirit of Big Day Out to deliver a unique event. We hope you will join us; it's going to be wonderful.

So, without further ado...

Big Day Out is proud to present Seattle's PEARL JAM who will be playing at each Big Day Out including different sets at each Sydney show. Officially closing the Blue Stage, you don't want to miss out on Pearl Jam's debut Big Day Out shows. This will be your only chance to see Pearl Jam in Australia and New Zealand this summer.
Pearl Jam's much-anticipated tenth studio album, Lightning Bolt, will be released internationally on October 14, 2013. Lightning Bolt is available for pre-order now and the debut track from the album, "Mind Your Manners," is available for download - both on iTunes and at www.pearljam.com.

ARCADE FIRE are gracing Australia and New Zealand for the first time since their ethereal performances at Big Day Out 2008. Their 2010 album The Suburbs broke new ground, giving way for them to win the Grammy Award for Album of the Year, and with their new album due on October 29, it's looking like 2014 will be Arcade Fire's year. Arcade Fire will precede Pearl Jam.

Finally we can witness what to many is a big part of the soundtrack to our lives. In honour of Blur we are creating a new stage, and it felt right to be emotional so we called it 'LOVE'. As Pearl Jam close the Blue Stage, Blur will begin on the Love Stage.

And when you have a jeweled crown, of course you need a king..

We welcome the one and the only SNOOP DOGG aka SNOOP LION who will be joining us for the first time, performing all of his biggest hits! Get your shizzle rizzle 'cos we are Snoopifying the 2014 Bigg Dogg Out! Snoop's good friends, musical collaborators and fellow Big Day Out first timers MAJOR LAZER are also bringing their hip-hop dancehall mash-ups to the main stages to shift it all up a notch.

And when you need to lift the roof off the Boiler Room its hard to top Sweden's STEVE ANGELLO and Australia's rising star FLUME to deliver the goods.

We are proud to have THE NAKED AND FAMOUS, MUDHONEY and COSMIC PSYCHOS also return to the Big Day Out, and welcome to the club GROUPLOVE, THE LUMINEERS, MAC MILLER, TAME IMPALA, NORTHLANE, PEZ, GHOST, PORTUGAL. THE MAN plus many, many more that will form the DNA of the 2014 Big Day Out.

Big Day Out is biting back once more with the return of the delicious CHOW TOWN. Lead by Ben & Elvis (of Porteno/Bodega - Sydney Morning Herald's Chefs of the Year), Chow Town changed the landscape of festival food in Australia when it launched in 2013.

We will roll out more bands and all the extra bells and whistles in due course, including THE LILYPAD, special attractions and other distractions that truly make it a Big Day Out. MTV return as our presenting partner for 2014 with some very exciting news to be announced in the coming weeks.

*Bliss N Eso all states except Adelaide
**360 Adelaide only