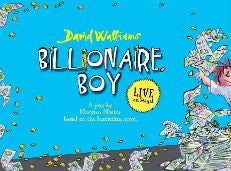 a play by Maryam Master

based on the book by David Walliams

Twelve year old Joe has everything a boy could ever want, from a golden underwater Ferrari to his very own cinema. But Joe is about to learn that money can’t buy you everything. What Joe really needs is a friend.

David Walliams’ best-selling books comes to life on stage for 6-12 year olds and their adults! Don’t miss this original Australian stage adaptation, as the team behind Mr Stink and the Storey Treehouse series return with songs, laughs, and yes that cat sick and sweet potato mash from the canteen…