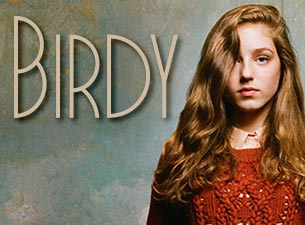 British songstress Birdy has been delighting audiences with her humble persona and catchy cover songs ever since making her debut in 2011. Although new to the pop scene, she possesses the impressive piano chops of a seasoned performer, delighting fans with beautiful renditions of Bon Iver's signature tune "Skinny Love" and James Taylor's classic "Fire and Rain," to name a few. Birdy is a dynamic young artist whose rich voice has transcended the bounds of the traditional singer-songwriter genre, and she'll treat ticket buyers to a number of new tracks alongside her famous covers as she warms up the stage for Christina Perri.

Born Jasmine van den Bogaerde, the piano prodigy attracted mainstream success at just 12 years old when she performed under her nickname Birdy and won the 2008 Open Mic UK contest. Three years later, she performed a stripped-down version of Bon Iver's tune "Skinny Love" on YouTube, racking up more than 60 million views and launching to stardom overnight. Her 2011 eponymous debut followed, which topped charts in three countries and garnered serious praise from music blogs and magazines. Since then, she's collaborated with fellow English folk band Mumford & Sons, performed at countless music festivals, and released her acclaimed 2013 sophomore LP Fire Within. Birdy will continue to soar to new heights as she supports Christina Perri on the Head or Heart tour.