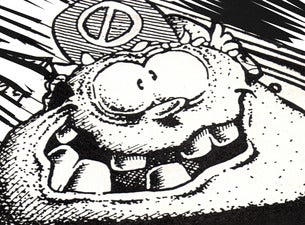 Easter 2020 marks a year since the tragic, untimely passing of Rollo, Blowhard’s founder and vocalist. Blowhard and top-flight Brisbane and Sydney alternative acts will assemble on Easter Saturday 11 April at The Tivoli to honour the Great Man’s legacy.

That Rollo led Blowhard for 30 years is a momentous achievement, given his and the band’s collective history in other punk/alternative outfits. Blowhard was also the third ever Brisbane punk band (after The Saints and The Onyas) to tour overseas.

Additionally, Rollo’s activities as a concert promoter cement his legacy across the Brisbane music scene and beyond. The likes of Custard, Powderfinger and members of Regurgitator all played early shows at Rollo-driven events, as did many an up-and-coming interstate band. During his guest-spot with the remaining Blowhard members at 2019’s Dead of Winter Festival, Frenzal Rhomb’s Jay Whalley fittingly paid tribute to Rollo’s early help in establishing Frenzal’s profile.