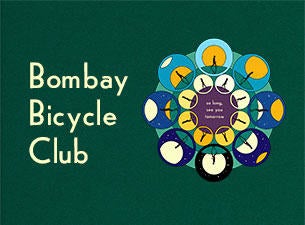 UK band BOMBAY BICYCLE CLUB are heading to Australia’s East Coast for headline shows this Spring, following the February release of their latest album, So Long, See You Tomorrow.

Playing The Tivoli in Brisbane, Metro Theatre, Sydney (all ages show) and The Forum, Melbourne, these will be Bombay Bicycle Club’s first Australian dates in almost two years.

Growing up in North London, the foursome of Jack Steadman, Jamie MacColl, Suren de Saram and Ed Nash signed a record deal shortly after leaving secondary school, releasing their guitar-driven debut, the NME award-winning, I Had the Blues But I Shook Them Loose in 2009.
In 2010 they released follow up album, Flaws, reaching top ten in the UK charts and nominated for the Ivor Novello award for Best Album.

Tapping into diverse cultures for further inspiration, the band’s fourth album in five years - the beautifully crafted So Long, See You Tomorrow (through Island Records / Caroline) - was delivered earlier this year. Featuring singles ‘Carry Me’ and ‘Luna’, the timeless record was penned and produced by Steadman in the band’s London studio over 18 months, telling a story from the first track to the last.

TICKETS ON SALE 10AM TUESDAY JULY 22