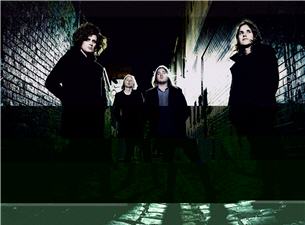 British India have long been a favourite with Australian audiences. Their first album Guillotine saw them win the AIR Award in 2007 for Best Independent Artist and receive a J Award nomination for Album of the Year. Their next two albums Thieves and Avalanche both debuted in the ARIA Top 10, with Thieves earning the band an ARIA nomination for Best Independent Release.

Controller sees British India at the height of their powers. The clever artwork for the album was created by the team at Oh Yeah Wow, who painstakingly constructed miniature models of each set up, built a tempestuous skyline to go along with it, then rigged up some lighting and photographed the entire thing.

The band’s fourth album is loaded with potent drum beats and layered, exhilarating guitars, hip-shaking melodies and a lyrical genius from lead singer Declan Melia that is too often lacking in rock albums. Featuring the Hottest 100 hit I Can Make You Love Me and the explosive new single Summer Forgive Me, it’s apparent on Controller that the bands have captured all of the attitude, poise and swagger that made their past three offerings so successful. These 10 album tracks see British India re-invigorated, in their finest and most assured form to date.

Controller is the band’s 3rd Album in a row to debut in the Top 10 ARIA Album Chart it was also featured as the TRIPLE M Album Of The Week!

Their back catalogue of hit tracks like “I Said I’m Sorry” “Vanilla” “I Can Make You Love Me” and “Summer Forgive Me” has cemented them as the 6th Most Played act nationally on Triple J Radio, out of almost 13,000 other acts.

Live, the band are something else, their shows are a fiery, in-your-face display of first-rate musicianship, guaranteed to get you moving. A must see.