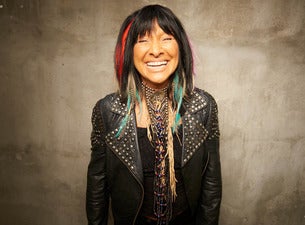 Nobody could ever accuse Buffy Sainte-Marie of taking it easy. Since her groundbreaking debut album, 1964’s It’s My Way!, the Cree singer-songwriter has been a trailblazer and a tireless humanitarian advocate, an Academy Award-winning innovative artist, and a disruptor of the status quo.

She has written pop standards recorded by the likes of Janis Joplin, Elvis Presley, Donovan, Joe Cocker and Jennifer Warnes, and her song “Universal Soldier” was the definitive war anthem on the 20th century.

Buffy Sainte-Marie makes us feel stronger and more capable of seeing the world around us more clearly. Part rhythmic healing, part trumpeting wake-up call, this is a soundtrack for the resistance.

“In a career spanning over half a century, Buffy Sainte-Marie has created a fresh, relevant, sonic social criticism with her newest release Medicine Songs” – Canadian Beats