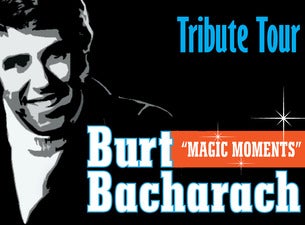 Burt Bacharach is one of the most prolific and successful songwriters of the 20th century. A multiple grammy and academy award winner, & together with lyricist Hal David, has published over 700 songs.

This performance will feature over 22 of his most popular hits, such as I’ll never fall in love again, I say a little prayer, That’s what friends are for, Close to you, Alfie, What the world needs now, Walk on by, Raindrops, This guys in love with you, Promises promises, and more!!!

Now aged 87, Burt Bacharach still tours the world, and was recently in Australia.

Such a variety in style, tempo and subject is the trademark of Bacharach, with top musicians including tenor saxophone, piano, drums and also featuring specialist singers in the Bacharach style.