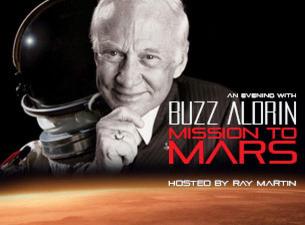 
Buzz Aldrin is a living legend of Space exploration. In Mission to Mars we take a journey with Buzz through space history and into the future, a future beyond planet Earth. We will relive his incredible missions from fighter pilot in Korea, his pioneering flight in Gemini 12, where he made the world’s first successful record-setting complex space walk EVA, Man’s historic Apollo 11 Moon landing and together with Neil Armstrong becoming the first two humans to set foot on another world.

Now Buzz is on a new mission, a mission to land humans on Mars by 2035 and he has a revolutionary plan to do it.  Hosted by Australia’s most experienced journalist Ray Martin and using stunning images and footage from Buzz Aldrin’s personal library of material, this is an opportunity to see and learn about the future of space exploration from one of the greatest heroes of our time.

A snapshot of just some of Buzz Aldrin’s lifetime achievements:

Buzz Aldrin is the first NASA Astronaut to hold a Doctorate of Science in Astronautics from MIT.

Buzz Aldrin develops the docking and rendezvous techniques for spacecraft in Earth and Lunar orbit, which are still used today. Earns the nickname amongst fellow Astronauts  “Dr Rendezvous”.

Neil Armstrong and Buzz Aldrin become the first two men to walk on the Moon.

Buzz Aldrin is the developer of Aldrin Mars Cycler, a spacecraft system with perpetual cycling orbits between Earth and Mars designed to achieve a manned missions to Mars by 2035.