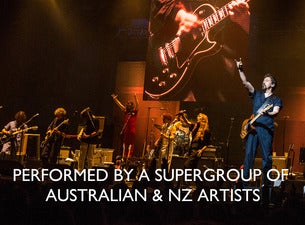 It's been 40 years since the release of Neil Young's Live Rust album and to celebrate a supergroup of Australia and NZ's finest artists and musicians will perform that mother lode of Live Rust hits track by track-back to back.

From Comes a Time, After the Gold Rush and The Needle and the Damage Done to the thunderous exhilaration of Like A Hurricane, Cinnamon Girl and Cortez the Killer, this is the best of Neil Young at the peak of his powers being performed by a powerhouse of accomplished artists and musicians.

With one of the greatest repertoires known to rock, the Live Rust concerts are not to be missed by Neil Young fans!