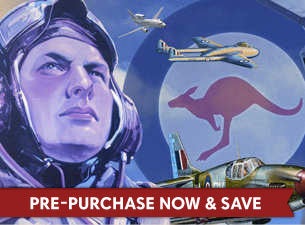 PLEASE NOTE:
Tickets are available on the Ticketmaster website at a discounted price of $30* for adults and $10* for children. Car park passes at a cost of $10* will be available online.  An online family ticket (2 adults and 2 children) costs $76*. Also, online tickets sold before the event will include free public transport via VicRail to Williams Landing Station (from any Zone 1 and 2 station), and free shuttlebus from Williams Landing to and from the event.

Gate Sales
Tickets will also be available for purchase at box offices at the venue on the days of the event at a cost of $40 for adults, $10 for children and family tickets are available at a cost of $96. The cost of car parking is built into the adult ticket price (if purchased at the gate).

The Centenary of Military Aviation Airshow Point Cook is proudly presented by the Royal Australian Air Force at RAAF Williams, Point Cook, Victoria over the weekend of 1st and 2nd March 2014.

Point Cook is the birthplace of military aviation in Australia and the oldest continually operating military airfield in the world.

Encompassing a spectacular Air Show with air displays and ground displays, the Centenary of Military Aviation is a national event celebrating 100 years of military aviation in Australia.

The flying program is the same for both days of the Air Show.

The event highlights the significant advances in military aircraft during the past 100 years.