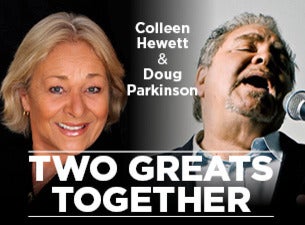 Two of the greats of Australian music Colleen Hewett and Doug Parkinson will perform together on stage for one very special show at The Palms at Crown on Saturday 30 January.

Colleen’s career began in her teens and by 20 she was a star.  She released her first single Superstar along with her self-titled album in 1970.  Her next single Day By Day was a smash hit.  It went gold and she was crowned Queen of Pop two years running. In the early 70’s she took a shine to theatre, starring in the smash hit musical Godspell and then Pippin with John Farnham. Her music career continued with two more gold records with Dreaming My Dreams With You and Wind Beneath My Wings.  Colleen has continued to combine her music and theatre, starring in the stage musicals Shout and The Boy From Oz with Hugh Jackman.

Doug Parkinson has had a diverse career in music and theatre over four decades.  His career began with The Questions in the 1960’s before forming Doug Parkinson In Focus which became one of the most popular bands in Melbourne.  Their cover of the Beatles Dear Prudence was a major hit nationally.

Doug went solo in 1972 and has established himself as one of Australia’s most recognisable and distinctive artists, performing in concert and major stage productions including Jesus Christ Superstar and Big River and he starred as the Big Bopper in the highly acclaimed Buddy.

Two Greats Together promises to be a very special evening at The Palms at Crown.