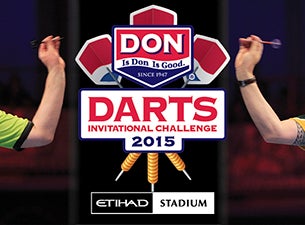 INTERNATIONAL DARTS RETURNS TO ETIHAD STADIUM BIGGER THAN EVER!
Etihad Stadium is excited to announce it will be hosting its third Don Smallgoods Invitational Darts Challenge on Friday January 9 and Saturday January 10 2015.

The two-day event will be held in the Etihad Stadium Arena mode and will feature four of darts’ biggest international names including Australian, Simon ‘The Wizard’ Whitlock, the Dutch duo of Mighty Michael van Gerwen and ‘Barney’ Raymond van Barneveld and the resurgent James ‘The Machine’ Wade from England. This will be the first appearance by the players after the 2014 World Championships.

Darts has continued to grow in Australia as a sport and as an event. Etihad Stadium hosted its first Darts Invitational Challenge in August 2013 which saw more than 1,000 spectators gather in the Victory Room. In January 2014, the event was held over two nights in Arena Mode and attracted a noisy and colourful crowd of more than 8,000 fans.

Etihad Stadium CEO, Paul Sergeant, said the overwhelmingly positive response from fans at the January event proved the sport had a loyal following here in Australia.

“Darts has a massive following in Australia and is the UK’s largest indoor sport so seeing the reaction of the thousands of passionate fans dressed up and chanting at Etihad Stadium in January clearly shows Australians have fallen in love with the sport too,” Mr Sergeant said.

Simon ‘The Wizard’ Whitlock
Simon Whitlock is Australia’s most successful Darts player, winning more than 50 tournaments around the world. In 2014, Whitlock won the 12th Players Championship and made the semi finals of the World Championships as well as the final of the European Darts Open. ‘The Wizard’ is currently ranked fifth in the world and is as renowned for his famous hair and he is for taking the maximum 180 shot more than anyone else on the circuit.


Mighty Michael van Gerwen
Michael van Gerwen is currently ranked number one in the world after an extremely successful 2014 season. Mighty Mike kicked off the year with a win at the World Championships which elevated him to number one status and has gone on to win the Dutch, Dubai and Singapore Darts Masters events. Van Gerwen was also runner up at the World Matchplay tournament and reached the semi finals of the UK Open.


James ‘The Machine’ Wade
James Wade is one of the most successful and colourful characters in the world of Darts. Currently ranked seventh, The Machine became the first player to beat champion Darts player Phil Taylor in the Premier League and is the second most successful player in PDC history behind Taylor. Wade was the youngest player ever to win a major PDC title at the World Matchplay in 2007. After a successful start to his career, Wade has once again found form, winning the 2014 Gibraltar Darts Trophy and reaching the semi finals of the Players Championship.