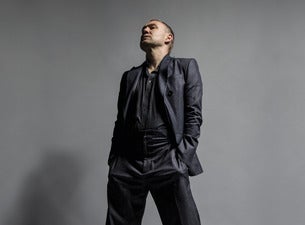 British singer-songwriter David Gray brought folk rock to the masses with his late-'90s smash "Babylon," and he's been wowing fans with his soulful voice and emotional live performances ever since. Gray doesn't need razzle dazzle to connect with fans in concert – his minimal yet effective arrangements are an exercise in restraint, and his gritty voice and poetic lyrics elevate favorites like "Shine" and "Hospital Food" from simple to stunning. A talented multi-instrumentalist, Gray moves fluidly between piano and guitar during his live sets, and his chops on both instruments provide the scaffolding for his heart-rending vocals. As he sings his heart out and extends the mic for ticket buyers to join in, fans can't help but get swept up in the emotional pull of his finely crafted folk rock tunes.

David Gray grew up in the Greater Manchester area and spent time living in Wales before returning home to Liverpool to attend art school. He played in several punk bands while attending university, but ultimately settled on the poetic folk-inspired sound heard on his first two albums A Century Ends (1993) and Flesh (1994). He found critical acclaim with 1996's Sell, Sell, Sell, but commercial success eluded him until the release of White Ladder in 1998. That album was a major triumph, topping the UK Albums Chart and going 10x Platinum thanks to hits like "Babylon" and "Please Forgive Me." Gray's next two albums, 2002's A New Day at Midnight and 2005's Life in Slow Motion, both peaked at No. 1 in the UK, spawning a string of popular songs including "Be Mine" and "The One I Love." In 2016 Gray released The Best of David Gray, a double CD set of his greatest hits that has fans ready to relive their favorite David Gray moments on his next tour.