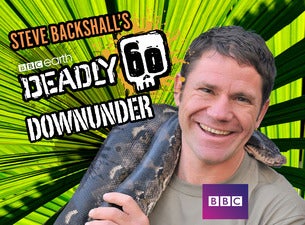 After two sell-out Australian tours, Steve Backshall, the star of the hit TV show Deadly 60 is returning to Australia with his brand new stage show.
However this time there is big difference … this summer Steve will appear live on stage with some of Australia’s deadliest animals!

Join Steve as he shares the wildest Deadly footage from his times in Australia … being lowered from a helicopter to dangle into a crocodile’s nest, or hand catching the world’s most venomous octopus just off Sydney Harbour. Plus there will be loads of audience participation and lots of on stage fun!
Don’t miss Steve Backshall and some of Australias deadliest wildlife on stage this summer!

“At a time when so much of television is read from autocue, it’s a joy to come across complete professionals whose love for their subject is second only to their knowledge of it. Those who don’t have young children may not have come across Steve Backshall; those who do will know that he’s one of the best-informed and most impressive presenters on television on either side of the Atlantic.” The Guardian