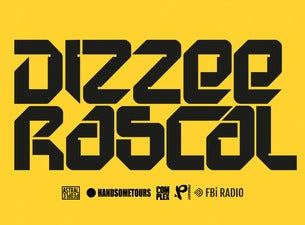 Since the breaking reception of his self-produced debut single “I Luv U” at age sixteen, to the now considered grime classic Boy in da Corner, which won the Mercury Prize in 2003 – Dizzee Rascal has kept the UK garage and hip-hop scenes alight as a prolific rapper, collaborator and producer. Maintaining top position in his field across the world ever since, Rascal has won BET, Brit, NME and Urban Music Awards for a back catalogue that spans six full-length albums - many platinum selling - and includes number-one hits like "Dance wiv Me", "Bassline Junkie" and "Bonkers".

Dizzee Rascal continues to reset the goalposts in grime and UK hip-hop, and on his sixth album, Raskit, he returns the compliment of Drake’s recent grime-flavoured mixtape. Raskit teams precision-tooled beats from an astute array of US producers (including Valentino Khan, Cardo and Paul Salva) with the sound of Britain’s most prestigious MC. The result is in a spiralling sub-bass vortex of introspective jeep-beats, which takes Jeremy Paxman (aka Dizzee) back to his roots, along with a hip-hop twist Jay-Z or E40 would be proud of.

Off the back of performances at renowned UK and US festivals Glastonbury, Bestival and Afropunk, and his own arena-sized UK tour – Dizzee Rascal makes a hugely anticipated return to Australia in February. As a figurehead and pioneers who continue to play a role in shaping the evolution and story of grime for many of today’s up-and-coming artists, don’t miss the chance to see this celebrated British MC in peak form.