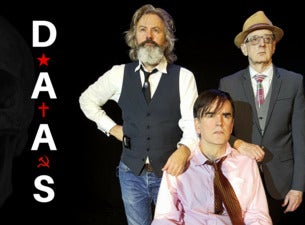 About Doug Anthony All Stars

Lock up your parents and pit bulls and brace yourselves for a freshly concocted, gloriously funny barrage of comedy brilliance from three (still) living legends of international comedy. Straight from their UK tour, Paul McDermott, Tim Ferguson, and Paul ‘Flacco’ Livingston are back in Melbourne with their shocking new show at the Comedy Theatre on Saturday 18 November.

The Doug Anthony Allstars continue to break box-office records around Australia and in the UK. Since their reformation in 2013, epic DAAS performances have left audiences stimulated to the brink of comedy ecstasy, begging for more of the group’s trademark bombardment of sex, death, violence, sex, feminism, music and sex. With almost a century of comedic experience combined, the second coming of DAAS has proven more wicked and dangerous than ever, complete with filthy faux pas, spirited singing and socio political commentary  - now with two extra decades of targets in sight.

A group with nothing left to prove, and no intention of going gently into the night. Thank goodness the Doug Anthony All Stars are growing old as disgracefully as possible. ★★★★★ - FIFE TODAY
Outrageous it may be, but it’s cathartic to be given license to laugh at the taboo… packed full of raw belly laughs. ★★★★★ – CHORTLE

Since the birth of the group in the mid 80s, DAAS revolutionised world comedy like nobody before or since. Now it’s your turn to experience the groundbreaking phenomenon of DAAS in an unforgettable night of dangerous, outrageously funny mob-rule chaos – the likes of which saw the group incite riots, ignite fires, silence the Spanish and get banned in Germany and Japan.