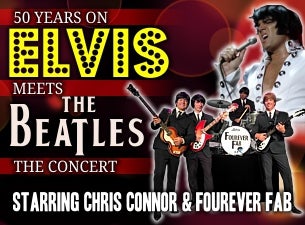 About Elvis Meets The Beatles

50 YEARS ON
ELVIS MEETS THE BEATLES
THE TRIBUTE CONCERT
Elvis Meets The Beatles’ 2015 concert tour celebrates the 50th anniversary of the famous meeting between the world's most iconic and influential recording artists of the 20th century.

It’s 50 years ago that the Beatles finally met their idol, Elvis Presley, at his Home in Los Angeles, or more precisely, the Beatles met Elvis. When the group travelled to the U.S. in 1964, they frequently cited Elvis as a major influence.

Most recently recognized as “The World's Best Elvis Performer” after topping a global fan poll, Chris Connor will co-star in this, his first, Australian tour along with the biggest names in Beatles tributes.  Hailing from Royton in Greater Manchester (UK), Chris is highly regarded as the closest resemblance to Elvis Presley and is currently performing to sold out shows across Europe and the USA in his production 'The World Famous Elvis show'.

Ironically, The Beatles tribute band 'Fourever Fab' are based in the USA and have been playing out of Las Vegas for the past 20 years and will recreate the sound, magic and hysteria of The Beatles from 1965. Having met some of the original Beatles, 'Fourever Fab' will ensure that this concert is remembered as one of the best Australia has ever seen.

To celebrate this golden anniversary, all Elvis and The Beatles biggest hits will be performed from the mid 60's right through to the early 70's including an epic grand finale which will have both tribute performers on stage together.

Backing this historical event will be the 'Elvis In Concert' band featuring Australia's only dedicated International Elvis backing band. Also on tour will be a 50 piece Choir and a hand selected Orchestra that will lift the show to great heights and never seen before in an Elvis or Beatles tribute show.

To commemorate the 50th Anniversary, we will also be recreating the actual meeting of Elvis and The Beatles with a live Jam session of joint hits and covers that both performed or recorded.

A once in a life time Concert commemorating 50 years of Musical history.