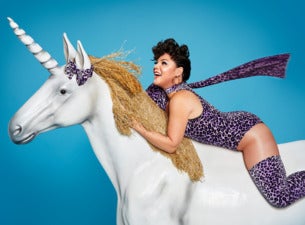 Stand-up comedian, singer, writer and broadcaster Em Rusciano is back with her biggest theatre tour to date! The Rage and Rainbows Tour will see Em and her 8-piece band leave a trail of glitter across the country.

For ten years, if you asked Em Rusciano how she was, she said, “fine”. Yeah bullshit. She was lying awake at 3am with unexplained rage, and so was EVERY OTHER WOMAN SHE KNEW.

This past year Em had a baby, turned 40, left a high profile job and had a combined 45 minutes sleep. There’s been next-level rage. There’s also been love. There’s been day drinking and breast feeding NOT AT THE SAME TIME PISS OFF CLICK-BAIT WRITERS.

In The Rage and Rainbows Tour, Em is finally giving voice that gnawing rage we all try to hide. She’s unleashing it, she’s dunking it in white wine, she’s rolling it in glitter, and giving it an 8 piece back-up band and four costume changes.

She’s also going to tell you what you can do with it; to send it on its way.

The Rage and Rainbows Tour is more than a show. It’s a festival for anyone who’s felt fed-up, furious, exhausted, demoralized... but still maintained a passion for sequins.

Em has teamed up with Australia’s 2019 Eurovision representative, the ridiculously talented Kate Miller-Heidke and her partner Keir Nuttall to write four original, fabulous songs especially for The Rage and Rainbows Tour. The songs are available here and learning all the words so that we can have a knee-trembling singalong is STRONGLY ENCOURAGED!

Em lovers know to book in early to be close to the action - The Rage and Rainbows Tour is bound to be another sell-out. And yes, of course Em’s Dad Vincie is in the band.

★★★★★ ‘Manic hilarity, chaotic extroversion and one huge and beautiful voice.' -  The Age