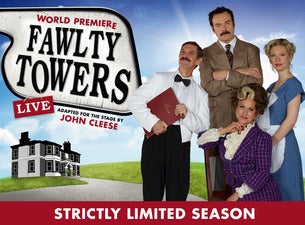 Basil is Back Australia! The World Premiere Tour of Fawlty Towers Live on stage will be touring Australia and New Zealand from August 2016.

Fawlty Towers Live will be based on the BBC TV series written by John Cleese and Connie Booth. It will be adapted for the stage by John Cleese, with direction by Caroline J. Ranger and set design by Liz Ascroft.

Manic, snobbish, condescending and rude, Basil Fawlty is without doubt one of the funniest, most iconic and memorable British comedy characters ever written. This original adaptation will bring all your beloved characters to life onstage in an unmissable evening of hilarity!

Playing the role of Basil is the extraordinary Stephen Hall, who will lead an all new Australian cast including, Blazey Best (Sybil), Aimee Horne (Polly) and Syd Brisbane (Manuel). Tickets are on sale now for the Australian tour, so come and check into Fawlty Towers Live!

And, whatever you do…Don’t mention the war!