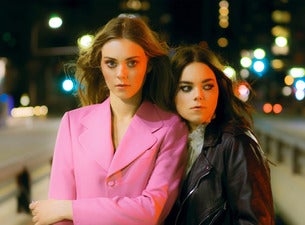 With their pitch-perfect harmonies and expertly crafted arrangements, Swedish indie folk duo First Aid Kit have become one of neofolk's fastest rising stars, breathing new life into the genre with their minimal, mesmerizing compositions. Sisters Johanna and Klara Soderberg's achingly beautiful voices weave in and out of one another with an intimacy that underscores their sibling relationship, making their deeply personal songwriting all the more emotional and rewarding. The girls stunned with stripped-down renditions of songs like "Ghost Town" and "Emmylou" at their 2013 shows, building anticipation for their 2014 tour dates in support of their third studio album.

Born and raised in suburban Sweden, sisters Johanna and Klara Soderberg began singing and recording songs together as teenagers, receiving their first radio airplay in 2007 when a local Swedish station picked up their demo "Tangerine." An EP released the following year would result in wider attention, after their cover of Fleet Foxes’ "Tiger Mountain Peasant Song" became a YouTube sensation, eventually resulting in a performance of the song alongside the band at a concert in the Netherlands. After making their full-length debut with 2010's The Big Black & Blue, the girls embarked on their first world tour, performing more than 100 shows on three continents. The band's 2012 sophomore album The Lion's Roar was an even bigger success, leading to a virtual sweep of the 2013 Swedish Grammis and setting the stage for the release of their highly anticipated third studio album in 2014.

"This band lays it all out in performance. Klara and Johanna's dynamic on stage is as lovely and easy-going as their gorgeous harmonies. One of the highlights for me was when they went without mics for 'Ghost Town' and had the audience join in singing."

"Their voices are strong and beautiful. Absolutely wonderful performance, some great surprises."

"These girls are incredible live. I was blown away!! They are very talented and super cute. Loved every bit of this show!"