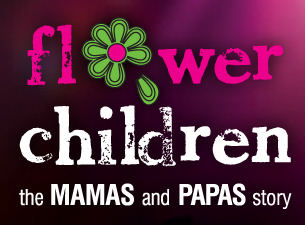 About flowerchildren - the mamas and papas story

'All the leaves are brown, and the sky is grey',
'Monday, Monday - so good to me'
'Birds singing in the sycamore tree… dream a little dream of me'

You know the songs and you love the music, but how well do you know the iconic American pop group behind it all?  They have sold nearly 40 million records worldwide and were the first group to knock The Beatles from the number one spot on the Billboard charts.

They are The Mamas and The Papas.

FLOWERCHILDREN, the exciting Green Room Award Winning musical starring MATT HETHERINGTON and CASEY DONOVAN, tells the turbulent  story of  The Mamas and The Papas, and explores the distrust, dangerous passions, and complex entanglements that lay behind their spectacular rise to fame.

With unforgettable melodies and tight vocal harmonies, FLOWERCHILDREN features a score of the group's timeless hits including Words of Love, Monday Monday, Dedicated to the One I Love, Creeque Alley, and the iconic California Dreamin' .

If you remember the 1960's, grab your peace jewellery and love beads, 'be sure to wear some flowers in your hair', and head down to the Comedy Theatre to re-live the era of flower power – of psychedelic colours,  bell bottom jeans, and the brave new world of sex, drugs and rock and roll.

If you weren’t there at the time, this is your chance to take a wild and wonderful ride with the group whose music defined a generation.

Presented by MAGNORMOS, written by AFI Award winner PETER FITZPATRICK, directed by AARON JOYNER and featuring the songs of The Mamas and The Papas.

Book your tickets for this exclusive and limited season now.