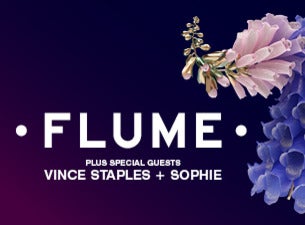 Australia’s biggest electronic export Flume will embark on a massive world tour - including a run of huge national dates in November/December - to celebrate the release of his anticipated forthcoming album, Skin (out May 27 via Future Classic).

Support comes from unstoppable Long Beach MC Vince Staples - who features as a special guest on the album for ‘Smoke & Retribution’ - and enigmatic UK producer SOPHIE. Both acts were highlights of the Laneway bill this year - Vince with his excellent first album Summertime '06 in tow, and SOPHIE on the back of his avant-garde electronic debut Product.

Flume’s last headline dates in Australia in 2013 included multiple Hordern Pavilion and Festival Hall shows and completely sold out. He headlined the 2016 Laneway Festival in February to rave reviews.

Flume is taking this show on the road with a run of over 70 dates worldwide including 10,000+ capacity shows in London, New York and many more.  An August show at the iconic Red Rocks in Colorado (9,500 cap) has already sold out.

Music from the new album is already receiving great critical acclaim: Pitchfork calls the music “custom made for dark, secluded warehouse raves”, while Nylon names it “powerful and utterly unique”.  Lead single “Never Be Like You” continues to climb charts around the globe.  It is currently #29 on U.S. Top 40 radio and #7 on the Billboard Hot 100 after being streamed more than 85 million times since release and reaching #1 on Spotify’s Global Viral Chart and #1 on Hype Machine. Climbing up the Top 100 Shazam charts globally, the track is seeing radio success across Europe and is a #1, Double Platinum single in Australia, a first for Flume, as well as #2 and Platinum in New Zealand.

The second single, "Say It feat. Tove Lo", released last week, debuted as BBC Radio 1 Hottest Record and Track of the Day. Host Annie Mac says of the single: “He’s done it again. Flume has made another smasher.”

Tickets will be on sale to the general public from 10am local time, Monday 16 May, available for purchase from lanewaypresents.com.