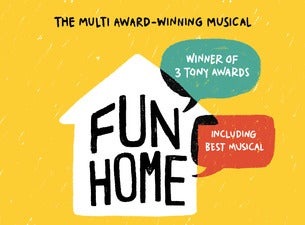 Music by Jeanine Tesori; Book and Lyrics by Lisa Kron

Based on the novel by Alison Bechdel

After smash-hit seasons on Broadway and in London, Fun Home comes to Sydney in a soaring brand-new production.

Winner of three Tony Awards including Best Musical and Best Original Score, and a finalist for the 2014 Pulitzer Prize for Drama, Fun Home has been hailed as a “beautiful, heartbreaker of a musical” (New York Times) and “one of the best new musicals of our era” (LA Times). Based on Alison Bechdel’s graphic novel, it’s a heartfelt story about coming out and coming of age.

After the unexpected death of her father, Alison is forced to confront his secrets that come to light. Shifting between past and present, we meet present-day Alison, a successful graphic novelist; college-age Alison on the cusp of self-discovery; and precocious-child Alison, who plays in coffins instead of sandboxes in the family’s Bechdel Funeral Home.

Don’t miss this chance to see one of the hottest musicals to come out of the US in a decade.

“Fun Home is not your ordinary Broadway musical, because it is extraordinary.”  Time Out New York